Evan Dorkin, Veronica Fish, and Andy Fish‘s first Blackwood miniseries arrived last year, and it made quite an impression. The story of four under-achievers who receive scholarships to a school for the occult is at times wickedly funny, at others gruesomely horrific, and full of wild ideas and genuine heart throughout. The arrival of a sequel series, Blackwood: The Mourning After, is welcome given both the number of lingering mysteries at the end of the first volume, and the complexity and relatability of the characters and the world Dorkin and the Fishes have created.

The new series finds the remaining leads (one of the students was killed in the first series), who have been bound to Blackwood College following a curse from the school’s now-deceased former dean, trying to pick up the pieces in the immediate aftermath of the previous story. The school sees the arrival of dozens of visiting faculty members in town for the dean’s funeral—but could one of them also secretly a killer? And who or what is the mysterious apparition that’s trying to contact the three scholarship students?

With Blackwood: The Mourning After #1 due in stores and digitally next month, Dark Horse Comics has provided The Beat with an exclusive look at some behind-the-scenes process art by Veronica & Andy Fish for the forthcoming series. On returning to the series, the Fishes had this to say:

“We are so pumped to get back into the Blackwood world.  Evan’s scripts are so exciting to read and even more so to draw, the story just keeps getting deeper and more intense.  We hope our love of the characters and the environment comes through in the art.”

The trade paperback collection for the first Blackwood series includes a fair amount of process art like this, and it’s great to see this part of the process from a team of creators at the top of their game. Check out some character sketches, as well as a look at prelim pencils and finished inks for a panel from the first issue, below. You can also see a few preview pages from the issue alongside our interview from last month with the full creative team.

Blackwood: The Mourning After #1 has a final order cutoff date of today, January 20th, and is due out digitally and in stores on February 12th. The first Blackwood series is available in a collected edition in stores and digitally now. 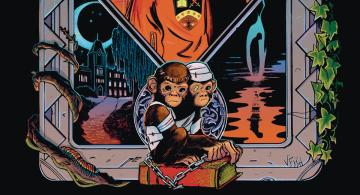