The Making of David Bowie's Starman, in Comic Book Form

Memory Man and creator Paul B. Rainey has a big new comics project with some big names involved, in one way or another. Starman: The Man Who Sewed The World is a comic book adaptation of a musical documentary about Freddie Burretti, David Bowie 's very close friend and key early 1970s Ziggy Stardust costume collaborator. In collaboration with the filmmaker Lee Scriven, Rainey has adapted the little-seen film into a comic book.

Starman: The Man Who Sewed The Worldis the story of Freddie Burretti, a young, working class gay man living in Bletchley, now part of the very young new town, Milton Keynes. Freddie is passionate about designing and making clothes and dreams of one day meeting his "Starman". Unfortunately, 1960s Bletchley isn't an ideal place to be if you're young, talented and gay with dreams of changing the world. Freddie's family are concerned for him, his friends don't understand him and he's often the victim of torments from local thugs. Eventually, Freddie decides to accept his uncle's offer of work in his tailor's shop and moves to London. There he establishes a life for himself in which he feels accepted by his new colleagues and friends. One night during the early 1970s, he meets his "Starman", a young, imaginative musician with dreams of pop super-stardom. The two strike up a close friendship and partnership that results in the creation of a pop persona the likes of which no one has seen before. One night in 1972, after a memorable appearance on Top Of The Pops, Freddie's Starman achieves international success.

Rainey tells us "my comic-strip version of the story is an adaptation of the musical written by Lee Scriven, created with permission from and in cooperation with the author. I've attempted to capture the spirit of Lee's production in forty pages using an artform that doesn't have any sound."

The comic-book is 40 pages long, with a full-colour cover, and two-colour interiors, as below. It's designed and printed to look like a 7'' single and is available now for £7, only at this link. Not available in stores... 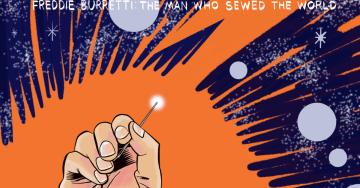