Publishers Weekly reports that the numbers of print books sold in outlets that report to the NPD BookScan sales measuring system, in the week ending on April 25th, was up by 10.9%. And this isn't just down to bookstores being closed and now opening, sales numbers were up 4.7% over this week last year. Naturally, with pandemic gripping our world, religious-themed work had the biggest sales gain, with a jump of 69%. But the graphic novel sector did pretty well too, with graphic novel sales jumping 43% on the previous week, and a similar amount on the same week last year. Graphic Novels Sales Up 43% in Bookstores, During Diamond Shutdown. Art from DC.

Bookstores appear to have remained open moreso than comic book stores and, in some territories, have been labelled as essential services. Bookstores have also continued to receive graphic novels from their distributors when comic book stores, largely, have not. Marvel, DC Comics and other publishers have continued to provide the bookstore market with new titles, though the like of Image Comics has not, as it is exclusive with Diamond Book Distributors for house markets as well. But other, bigger publishers such as Scholastic, have continued to sell graphic novels during this time. Might traffic from comic book stores have helped bump up bookstores' numbers, especially for original graphic novels like Gotham High or Lost Carnival: A Dick Grayson Graphic Novel?

The possibility that custom may switch from comic book store to bookstore relatively easily may not sit too well with those who noticed that DC's decision to move New Comics Day to Tuesday instead of Wednesday means that comic stores will no longer get a 6-day exclusivity window on such titles. could the bookstore be more of a competition to the comic book store in the months going forward?

If you want to keep up with Bleeding Cool's coverage of the current global situation as well as the continuing New Distributor Wars of 2020 , you can bookmark these links. 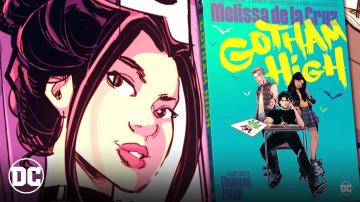