Fans of Chris Pratt who enjoyed seeing him back on the small screen for the Parks and Recreation charity special might want to pay attention to this next item. The Everwood and Parks \& Rec alum is set to star in and executive produce The Terminal List for Amazon Studios, a series adaptation of Jack Carr 's bestselling novel. Directed by Antoine Fuqua ( Training Day, What's My Name: Muhammad ) and written by David DiGilio ( Strange Angel ), the series will serve as a co-production between Amazon Studios and Civic Center Media, MRC's joint TV venture with UTA, in association with MRC Television.

Pratt is looking to make the series as authentic as possible, having veterans and their families serve in multiple aspects of the production process. Half of the series' writing staff are either veterans or have veterans in their families. Pratt negotiated the rights to the novel from author, former Navy SEAL, and special ops team leader Carr, bringing it to Fuqua before the two approached MRC. DiGilio will executive produce with Pratt via his Indivisible Productions, with Fuqua executive producing via his Fuqua Films banner. Jack Carr's The Terminal List is coming to Amazon Prime, courtesy of Atria/Emily Bestler Books.

Published in 2018 by Atria/Emily Bestler Books, here's a look at Carr's novel, The Terminal List :

A Navy SEAL has nothing left to live for and everything to kill for after he discovers that the American government is behind the deaths of his team in this ripped-from-the-headlines political thriller.

On his last combat deployment, Lieutenant Commander James Reece's entire team was killed in a catastrophic ambush that also claimed the lives of the aircrew sent in to rescue them. But when those dearest to him are murdered on the day of his homecoming, Reece discovers that this was not an act of war by a foreign enemy but a conspiracy that runs to the highest levels of government.

Now, with no family and free from the military's command structure, Reece applies the lessons that he's learned in over a decade of constant warfare toward avenging the deaths of his family and teammates. With breathless pacing and relentless suspense, Reece ruthlessly targets his enemies in the upper echelons of power without regard for the laws of combat or the rule of law. 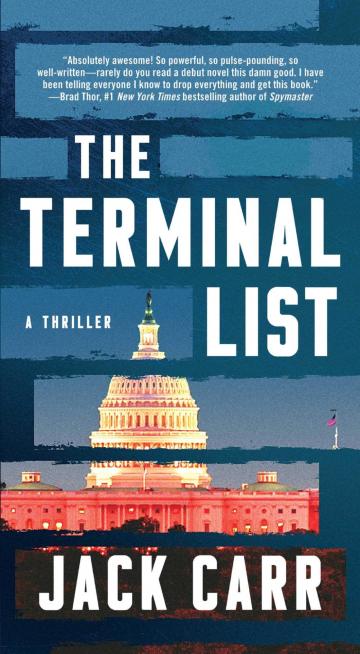