Cartoon: The wit and wisdom of Donald J. Trump

Announcing TWO Tom the Dancing Bug books coming in May from Clover Press, in celebration of the comic's upcoming 30th anniversary--> Tom the Dancing Bug: Into the Trumpverse , and The Super-Fun-Pak Comix Reader. Information about the books, including how to pre-order, and special offers HERE.

"Behold the wondrous, whimsical, witty world that is Tom the Dancing Bug! If you're someone who's not a fan of potent political humor with an incisive absurdist twist that's not only consistently funny, but downright therapeutic for an ailing world, I suggest you avoid this book like the plague. For everyone else, it's a MUST-READ!"
-Mark Hamill

JOIN Tom the Dancing Bug's INNER HIVE. Get exclusive access to comics before they are published, sneak peeks, insider scoops, and lots of other stuff. JOIN TODAY.

FOLLOW @RubenBolling on the Twitters and a Face Book perhaps some Insta-grams, and even my/our MeWe. 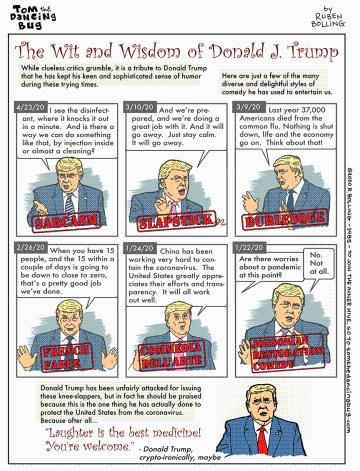