Unfortunately nearly 60 Republican Senators decided they loved their Russian campaign contributions so much that even when presented with overwhelming evidence of his guilt they voted to keep him. They need to be held accountable for all the dead Americans that caused. Nearly 60,000 as of this week.

Douglas Adams got there long before your friend.

"By-products," hissed Zaphod again, --- he had to hiss in order that his voice shouldn't be heard to tremble --- "of what."

"The Sirius Cybernetics Corporation were awarded a huge research grant to design and produce synthetic personalities to order. The results were uniformly disastrous. All the "people" and "personalities" turned out to be amalgams of characteristics which simply could not co-exist in naturally occurring life forms. Most of them were just poor pathetic misfits, but some were deeply, deeply dangerous.

Dangerous because they didn't ring alarm bells in other people. They could walk through situations the way that ghosts walk through walls, because no one spotted the danger.

Blood simple, with the charm of a con man who has chosen his mark.

Adams thought he was writing about Ronald Reagan. Little did he know that the same process of political selection could go so much further... 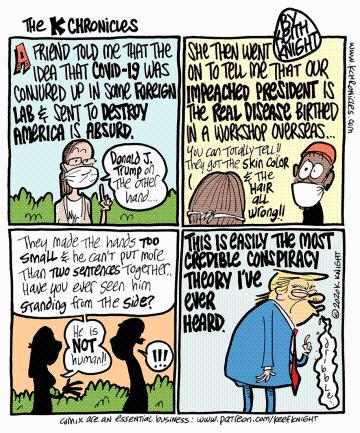