After weeks of teasers, previews, and official trailers, Showtime's Penny Dreadful: City of Angels is offering the ultimate temptation to those still on the fence over whether the series is worthy of making their "must watch" lists: the first episode for free. Created and written by original series creator John Logan and set in 1938 Los Angeles, the opener "Santa Muerte" finds Det. Tiago Vega ( Daniel Zovatto ), and Det. Lewis Michener ( Nathan Lane ) embroiled in a murder case that could shock the city to its core. Their investigation takes the partners down the dark roads of Los Angeles' history, from the building of the city's first freeways and its deep traditions of Mexican-American folklore to the dangerous influences of both the Third Reich and rising radio evangelism. As tensions rise and dangers mount, the investigation begins taking on apocalyptic proportions as war is waged between powerful sisters Madga ( Natalie Dormer ) and Santa Muerte ( Lorenza Izzo ) to determine the fate of all mankind. Penny Dreadful: City of Angels is offering its first episode for free, courtesy of Showtime.

For Vega, it's about balancing his Mexican-American heritage with his responsibilities as a detective while grappling with racism, childhood trauma, and issues of faith. Michener's a veteran officer, Vega's partner, and mentor, who is wise to the ways of the world and ruthless in getting what he wants. Magda is a demon who can take the appearance of anyone she chooses and manifests herself in a number of forms throughout the season. Charismatic, clever, and chameleonic, Magda can be an invaluable ally or a deadly enemy. Santa Muerte is the Angel of Holy Death and Magda's sister, and someone who holds a slightly more favorable opinion of what humanity still has to offer. 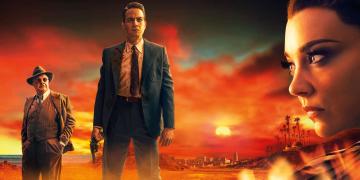