Marc Jackson is a British cartoonist, educator and a regular on Bleeding Cool. His life, just like all of us, is subject to upheaval and is being transformed. So he changing everything about what he does. He writes for Bleeding Cool;

Last month, as it was becoming increasingly evident of what was about to happen world-wide, I found the next 6 months of my work in Schools, Libraries and Festivals all get cancelled. Financially it was a huge blow, this is only counting what I knew of, there's always other opportunities that come along over the course of the Spring and Summer months. Quickly I needed to re-think my model and after seeing my U.S. cartooning palJoe Wos (Mazetoons) starting up online, I thought maybe it was time to do something similar but with my own unique spin. Tom Hanks and Joan Collins Join Marc Jackson Making Comics. Art from Marc Jackson.

I set up a YouTube channel called 'Marc Makes Comics' with the plan to run weekly live shows. The only trick to all this was my usually workshops earned money, at this stage this was all free and as you can imagine, takes a considerably amount of work to get things going. From the initial setup, to my wife standing over me in the kitchen whilst filming me drawing a robot overhead until we invested in a stand for my phone, all these things were a labour of love to get something out there. Then the wonderfulJulie Tait, the festival director at The Lakes International Comic art festival and friend approached me and offered support in the initial stages. To say LICAF have been instrumental in furthering my career in comics and as a cartoonist over the years (amongst many things, they assisted me in successfully achieving a grant from the Arts Council back in 2017) is an understatement. I was off and running, this made it feel a little more like serious business (well as serious as drawing cartoon lettuces wearing ties can be) and her faith in what we were attempting to do hopefully would then resonate with others.

I went all in, by going live each Wednesday and Friday at 2pm UK time, with the chance to catch up later if you aren't able to catch the show. The shows are a mix of drawing, comics chat all with the spirit of Saturday morning British TV from the 80's. I take phone-ins live on the air, have chatted to Tom Hanks, John McEnroe and Joan Collins (she requested I draw JR Ewing on the Friday all-request show 'Freestyle Fridays') and I even sang a duet with Stevie Wonder. Of course, no self-respecting cartoonist would do this on anything other than their own bright red 'Bat-phone' On the Friday shows I take requests from the comments section for 45 minutes live on air, whilst challenging the children with my own ideas. It's anarchic fun of the highest order! Tom Hanks and Joan Collins Join Marc Jackson Making Comics. Art from Marc Jackson.

I'm heading towards 600 subscribers and I actively encourage the viewers to share their own creations with me afterwards on all my social media channels. I really miss interacting with the children, parents and teachers, but it's great to know that I'm still able to connect with them this way. I also uploaded additional 'how to' demos featuring various characters and ideas of mine and myself and my daughters (who guest star most Fridays with suggestions) did a live read of my comic Hotdog and Mustard. I'm hoping over the next few weeks to connect up live with Joe Wos too as we cross-promote our respective shows. This is my way of doing something, anything, to keep my own sanity, entertain my own children and maybe brighten a few days for other families too. Plus single-handedly creating an army of young cartoonists to take over the world post lockdown!!! Tom Hanks and Joan Collins Join Marc Jackson Making Comics. Art from Marc Jackson.

Sadly, I've also found that some of my comics work has started to dip a little as publications switched their frequency to adjust to these uncertain times in publishing. I regularly self-publish my own comics too and was supposed to be working on #2 of my SPOOKIDS comic, but I've been struggling to focus on anything bigger. But I still wanted to be making comics and decided that doing a weekly web-comic might be just the thing. Earlier in the year I blasted out a comic about Magnum P.I. in a couple of weeks, that you might have read about right here and doing these fast-paced turnaround comics really helps to give your brain a little creative clarity. I came up with the initial idea just prior to lockdown after being inspired by Jim Rugg and Ed Piskor 's online show 'Cartoonist Kayfabe' Their shows about making comics in general and random episodes about TMNT and The Dark Knight, plus Ed's Instagram stories about the Miller and Klaus Janson Daredevil issues, really connected to how I think and like to make comics and fired my ideas to create something weird, wonderful and Ninja based! I created BRING THE NINJA! the tale of Chuck Chang and his costumed friend Floyd Fighter. The plan was to start it with no explanation, no origin issue, just jumping into a random situation and running with it, with no clear end in sight. In these weird times, it seemed like just the thing I could focus on, without having to focus too much. Tom Hanks and Joan Collins Join Marc Jackson Making Comics. Art from Marc Jackson.

The strip appears on my Instagram each Friday and will, on average be four panels, so basically a newspaper strip format, presented in black and white with old school halftones. I think in these tricky times, having something that folks can check in on weekly (like the families are doing with my drawing workshops) is really important and I hope folks enjoy this tale of Ninjas, robots and disgruntled wives called Linda. Hopefully later in the year when things settle down, I'll collect the strips in print and take them to LICAF in October and Thought Bubble in November, a great way to round off this insane year I'm sure you'll agree. See you in the funny pages. 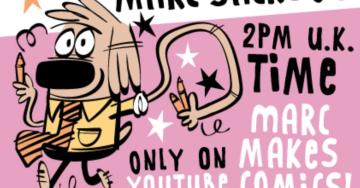