Street Fighter Chun-Li is Back as Morrigan with PCS Collectibles

PCS Collectibles is bringing the fight back to the streets as they announce a new Chun-Li statue. Coming out of the ever popular Street Fighter V series, Chun-Li is back yet again with a new Season Pass costume. This time she is wearing the Capcom Darkstalkers Morrigan costume and she is just packed with haunting detail. This statue is just like the recently announced Bikini Season Pass costume which we covered . The 1:4 scale statue will feature two different statues for players 1 and 2. She is balancing herself on a sea of red waves and is in a kicking pose ready to fight. Each statue features its iconic player colors, with bat patterned leggings, boots, and frilled arm sleeves. She does have two sets of bat wings, one on her head, and the other on her shoulders. These statues clash two great Capcom games and this statue is perfect for any gaming fans collection. I am defiantly a fan of these player 1 and player 2 style statues. They give great homage to the tradition of fighting games with this idea. Both PCS Collectibles Street Fighter Season Pass Morrigan Chun-Li Statue is priced at $465. The player 1 statue is limited to 600 pieces and player 2 is limited to only 300 pieces. They are both set to release between May and August 2021 and you can find the Player 1 Statue and the Player 2 Statue . I am sure we will continue to see more of these Season Pass Costume statues come out." Think you can keep up with me? " Street Fighter Chun-Li Morrigan Season Pass Costume, PCS Collectibles. "Sideshow and PCS Collectibles present the Chun-Li: Morrigan- Season Pass 1:4 Scale Statue, adding a new cosmetic look to your roster of Street Fighter collectibles. Kanzuki Beach runs red with blood! The Chun-Li: Morrigan Statue measures 18.7" tall, clad in the iconic costume of Morrigan Aensland from Capcom's Darkstalkers. Balancing on a black rock amid a sea of red waves, Chun-Li displays her impeccable balancing techniques in preparation for a deadly strike. This highly detailed video game collectible is directly inspired by one of the available cosmetics featured in Street Fighter V." "Faithfully recreated based on her in-game model, the Chun-Li: Morrigan Statue is dressed in a sculpted black and purple costume, with bat-patterned leggings, black boots, and red arm sleeves with a white sculpted fringe. Chun-Li now sports Morrigan's signature green hairstyle, with a pair of black and purple bat wings peeking out from her bangs. Another large pair of wings sprouts from her shoulder blades, completing her alternate costumed look. Celebrate two iconic Capcom heroines in one with this must-have statue for fans of the Street Fighter and Darkstalkers franchises!" 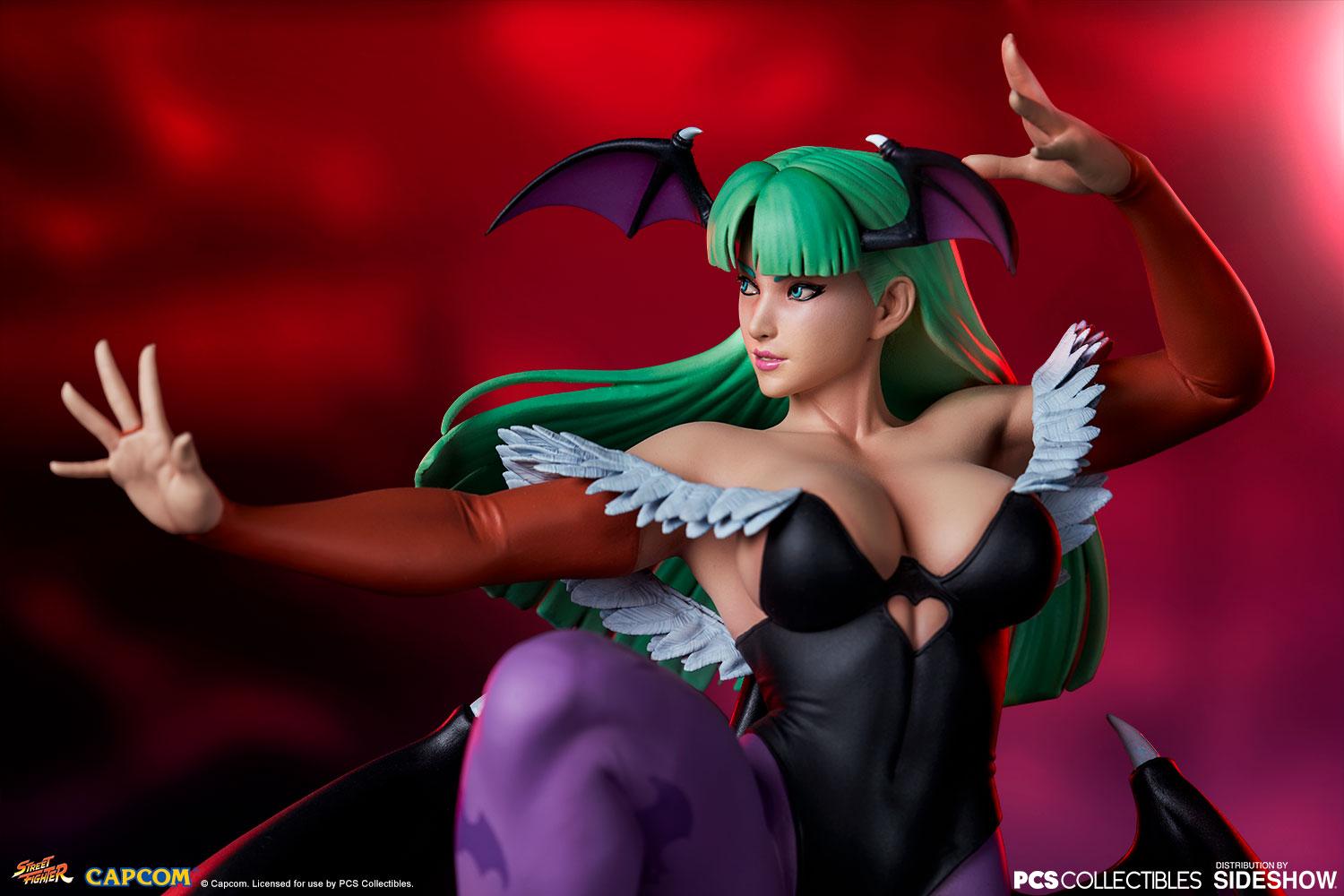