DC Comics Co-Publisher and CCO Jim Lee has been drawing a different sketch each day in insolation, posting it on social media , then selling it on eBay. The aim is to draw 60 sketches with DC figures and raise money for comic book stores in need via the action group BINC . A couple of day ago, rival publisher Ross Richie of Boom Studios has an idea. He posted to Jim Lee's Instagram, saying "I hope you're scanning these to release as a 64pp retailer charity comic. It will be a top-seller when released and be a great direct market rallying point."

Jim Lee seems to agree with Richie. He then posted yesterday saying "New wrinkle to this 60 sketches in 60 days---each image will be used as a variant cover for a future DC comic. And all 60 will be collected into a book which will also benefit BINC." And it seems Lee will not be alone in this endeavour. He has also posted that Art Adams will be joining him in this aim.

"Art will be doing a 9"x12" original sketch which I'll auction off via @eBay in addition to my #60sketchesover60days daily sketch of the day. Art thought it would be fun for you guys to decide what he would draw. Most likes in the comments section is what he will illustrate and we'll both post up the sketch when it's done. As with all these sketches, all the proceeds will go to support struggling comic shops in need! Thank you Arthur for your generosity and time and talent. Sound off below! And try and consolidate your voting for optimal results :) EDIT: looks like it's close between Wolverine and Dr Doom. Gonna let Art decide. Stay tuned to see his contribution."

How much could Jim Lee raise for comic book stores?

He also clarified the bit about 95% of the money going to the cause. "eBay reached out to me since this was all for charity and walked me through the process so they waive 95% of their fees too. Money goes straight to the Book Industry Charitable Foundation which has a fund which benefits comic book retailers struggling during this crisis. Why 95%? It's to leave some money behind to pay PayPal fees and shipping."

Checking in with the eBay listings of these images , they have been rocketing in price. The first sold for just over $4000, the most recent sold one, below, went for over $10,000. On this kind of scale, all 60 sketches could raise close to half a million dollars... Jim Lee draws the Batman Who Laughs for charity. 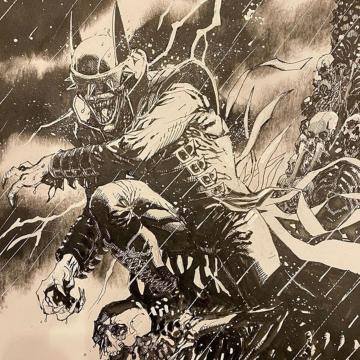