Mort Drucker, born in March 1929 was an American cartoonist best known for his work on MAD Magazine over five decades. His caricature strips parodying a cornucopia of TV, movies and related events are legendary. He died in his Woodbury home in New York yesterday . The cartoonist is survived by his wife Barbara Drucker , his daughters Laurie Bachner and Melanie Amsterdam , and his three grandchildren.

Drucker's comic book career began when he was 18, assisting on the comic book strip Debbie Dean, Career Girl with Bert Whitman . He joined the publisher who would later become DC Comics as a retoucher, drawing DC's Hopalong Cassidy, The Adventures of Bob Hope and War Stories. He also worked uncredited for The Mountain Boys cartoon by Paul Webb in Esquire Magazine. Drucker joined the staff of MAD Magazine in 1956, where he worked for 55 years until he retired. Drucker held the longest uninterrupted tenure of any MAD artist and had the most bylined articles by any Mad artist who does not also write his own material, with more than 400. Editor Al Feldstein credited Drucker's style and ability for the decision to start featuring TV/movie caricature strips in every issue of MAD. Artwork by Mort Drucker parodying The Empire Strikes Back. Mort Druckers poster for American Graffiti.

His work caused some legal issues over the years. When his parody of The Empire Strikes Back was published in 1980, George Lucas ' lawyers demanding that the issue be pulled from sale, and that MAD destroy the printing plates, surrender the original art, and turn over all profits from the issue. However the magazine had also received a letter from George Lucas praising the parody. Drucker had worked on the advertising campaign for American Graffiti at Lucas' request. Publisher William Gaines simply sent a copy of that letter to the lawyers and reviewed no further comment.

His artwork remains one of the most ingrained aspect of Americana. Drucker was recognized for his work with the National Cartoonists Society Special Features Award several times, its Reuben Award, and induction into the Society's Hall of Fame. Drucker was also awarded an Honorary Doctor of Fine Arts degree from the Art Institute of Boston. Bleeding Cool's thoughts are with Mort Drucker friends and family at this time. Mort Drucker, signing MAD Magazine in 2000. Photo by Gustavo Morales. 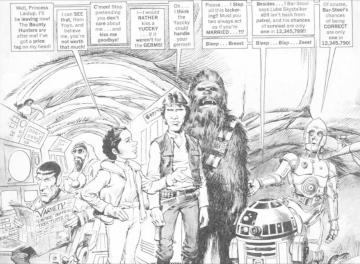