For the second week in a row, Action Lab will be one of few comic book publishers to launch a new series during the industry-wide shutdown. Cut-Man is a digital-first series by Alexander Banks-Jongman and Robert Ahmad starting Wednesday. Creator Banks-Jongman describes the series as "an exploration of broken people, the search for truth and the corrupting effects of power." He cites the influence of Tom King, Scott Snyder, Grant Morrison, and noir and thriller cinema such as the works of David Fincher, Se7en, and Gone Girl as influences.

"Hank Kelly might be blessed with great power, but his is not a superhero story," says Banks-Jongman in a press release. "CUT-MAN is an exploration of broken people, the search for truth and the corrupting effects of power. If you are a fan of stories digging into the psyche and the struggle of people finding purpose -- CUT-MAN is the book for you. Across every issue of the mini-series, we delve deeper into the protagonist, uncovering more and more of what makes him the man he is. Furthermore, if you enjoy stories that explore strange and unique concepts, CUT-MAN takes the cliché idea of immortality, and puts a dark twist on it, giving the power a grim consequence." Banks-Jongman says he wants readers to join Kelly on a journey "and follow his transformation from a flawed man to something darker, by his exposure to fame and fortune. I'd like the reader to make judgments on the morality of the characters, and whether or not they are wholly evil or good."

Cut-Man Asks: Whose Side Are You On?

The comic pits Hank Kelly against a detective named Rosalind Lovejoy, and like other great works of literature like Marvel's Civil War and Civil War 2, Banks-Jongman wants readers to choose a side. "At the heart of the story is Hank's twisted ideal of family," he says. "Throughout the piece, he is desperately trying to cling to his wife and daughter -- despite the fact they've been separated for a long time. Hank's desire for this is the emotional core, as a man -- Hank wants nothing more than to be loved and adored. However, when he can't get this from his family, he turns to the masses of followers, who pray to the immortal man." Cut-Man #1 will launch on digital comics platforms like ComiXology on Wednesday. We here at Bleeding Cool applaud Action Lab for using digital comics to entertain readers during these trying times. Action Lab may not be the heroes the industry deserves, but they're the ones we need right now. You can pre-order Cut-Man #1 for $2.99 here. Check out a four-page preview below. 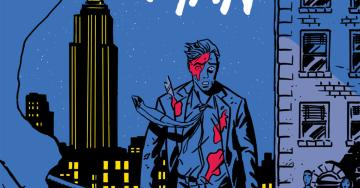