X-Men/Fantastic Four #3 was written by Chip Zdarsky with art by Terry Dodson , Rachel Dodson , and Ransom Getty . Laura Martin , Andrew Crossley , and Peter Pantazis handled colors. Joe Caramagna lettered. The issue is the third of a four-issue series, but the fourth issue is delayed while the industry is shut down. Setting aside, for now, the conclusion of this series, we've got the penultimate issue to recap. So, let's see what happened. The cover to X-Men/Fantastic Four #3 from Marvel Comics, with art by Terry Dodson and Rachel Dodson.

The ship lands on an island and a battle breaks out. Wolverine is able to cut a hole in the Human Torch's helmet, allowing Emma to take control of him. The X-Men want to bring the Fantastic Four back to Krakoa and try them for espionage. Doctor Doom interrupted, pointing out they're on Latverian soil now.

Magneto tries to use his powers on Doom's armor, but Doom references X-Men #25, when Magneto ripped out Wolverine's adamantium, and claims he isn't using just metal in his armor. Before the posturing can continue, Kate Pryde, Storm, Bishop, Pyro, and Iceman emerge and reveal they made a deal with Doom. Doom says he's going to restore Franklin's powers.

The Invisible Woman threatens Doom, but Doom says he likes the kids and he's going to do what their father couldn't and fix Franklin. Magneto isn't happy about this either, but Professor X backs up Kate's decision. Mr. Fantastic tries to argue, but Doom points out this is Franklin's choice. Doom says most of the visitors will need to wait on the beach while he fixes Franklin.

Back in Doom's lab, Valeria assures Franklin that it doesn't look like Doom's machines will hurt him. Doom, Reed, Professor X, Beast, and Kate arrive. Reed wants the kids to come home but Franklin refuses until Doom restores his powers. Read and Beast reluctantly agree to help Doom.

The Best There Is At What He Does

On the beach, Cyclops, Wolverine, Magneto, Storm, and Emma discuss the Latverian mutants on the island. Storm will stay behind and create a storm as a distraction while the X-Men, with the help of the Fantastic Four, will strike first to rescue the Latverian mutants because Doom will be expecting it if they wait until Franklin is healed. Cyclops will also stay behind with Storm to take care of Doom's guards if needed.

In the lab, Doom explains he has a similar theory to the "godpower" one discussed ni past issues, but Doom has been watching too many Star Wars prequels. He calls the particles that give people powers Von Doom Particles. Doom believes they travel through human mitochondria and by exploding Franklin's mitochondria he can restore his powers. What does Doom get out of this? He wants to be able to travel through the mitochondria to the godpower dimension and claim the power for himself.

Using Sue's powers, the X-Men sneak into the Latverian mutant village on the island. The Latverians are scared of the mutants, but Magneto, who speaks Latverian, begins to reason with them. Doombots attack. One of them grabs Wolverine and blasts off into the sky. As Emma, sensing something is wrong, tries to stop him, Wolverine stabs one of the Doombots.

Cutting back and forth between Doom's lab and the village, Reed makes peace with his son and the experiment begins. Meanwhile, Wolverine finds his claws covered in blood. Inside the Doombot is a Latverian mutant. Back in the lab, Doom gets word of what's happened. He unleashes the Doombot Sentinels.

My Opinion on X-Men/Fantastic Four #3

Well, we all knew this was coming. Doom always had his own motivations and it was only a matter of time before the X-Men and Fantastic Four were forced to team up against him. A certain point of view could place the blame on Wolverine here. He does have a habit it stabbing first and asking questions later. But Doom put those mutants in Doombots.

Next issue will be the big finale. Unfortunately, comics are on hold for the time being and we're gonna have to wait to see how this plays out. Hopefully Franklin does end up with his full powers back after this issue though. If not, or if some other major development doesn't come of this, it will feel like a bit of a waste.

Sworn to sell comics for Marvel executives who feared and hated the fact that Fox owned their movie rights, the Uncanny X-Men suffered great indignities in the past decade. But that dark era is past. Now, thanks to a corporate merger and a line-wide relaunch, the X-Men can finally return to doing what they do best: entertaining fans of the greatest soap opera of all time. Click the image to read more X-Men recaps.

A prophecy says that in the comic book industry's darkest days, a hero will come to lead the people through a plague of overpriced floppies, incentive variant covers, #1 issue reboots, and super-mega-crossover events.

Scourge of Rich Johnston, maker of puns, and seeker of the Snyder Cut, Jude Terror, sadly, is not the hero comics needs right now... but he's the one the industry deserves. 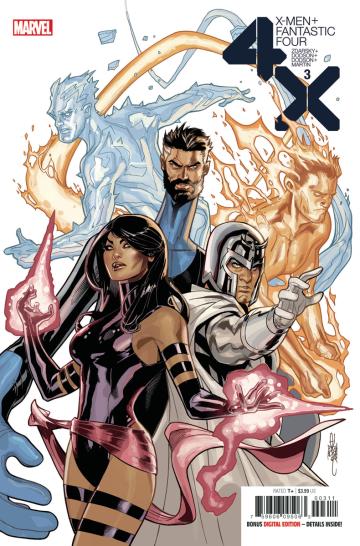