The Dreaming: Waking Hours is a new comic book series from DC Comics spinning out of Sandman Presents . Written by G Willow Wilson and drawn by Nick Robles , the first issue is scheduled for May 6th. That current schedule is, as with everything else, up in the air right now. However, DC Comics has now released the variant cover by Bill Sienkiewicz. Bill Sienkiewicz cover to the Dreaming: Waking Hours

Bill Sienkiewicz is just the beginning

The Dreaming: Waking Hours will introduce a new figure to the Sandman mythos: Ruin, the nightmare of catastrophic failure. As series writer G. Willow Wilson described the character on DCComics.com ,

"A nightmare who falls in love with the person whose dreams he was sent to haunt. A nightmare who doesn't want to be a nightmare and tries to change, who aches for a kind of human connection he might never have. It raises tantalizing questions from a storytelling perspective---if you have power that is inherently malevolent, can you simply choose to use it for good? Or is there more work involved? What do you have to sacrifice to become something better?

"That was the genesis of our 'lanky lavender lad,' as Nick (Robles) put it. He's very different from the other nightmares we've met in the Sandman Universe, all of whom live up to their names---they're malicious and sadistic. Ruin, on the other hand, isn't very good at his job. He's soft, he's shy, he's awkward, he's eager to please. He is as terrified by his own darkness as a dreamer would be. He makes this profound, heartbreaking effort not to frighten anyone. And he sets off on this quest to find the person he fell in love with, against all odds."

A new chapter in the Sandman saga begins with an all-new miniseries populated by faces both familiar and new! One of Dream's heaviest responsibilities is the creation of nightmares-the beings that haunt our sleep and turn our thoughts toward darkness. In the form of Ruin, the nightmare of catastrophic failure, Dream was certain he'd built his next masterpiece... but Ruin can't help but live up to his name, sending every situation into a spiral of unexpected consequences.

Unfortunately, Shakespearean scholar (and exhausted new mother) Lindy has dreamed of Ruin... and in the process, she's delivered him unto the waking world! The Sandman Universe is changing-and Hugo and World Fantasy award-winning writer G. Willow Wilson (Wonder Woman, Ms. Marvel, The Bird King) and breakout artist Nick Robles (Euthanauts) are here to welcome you! 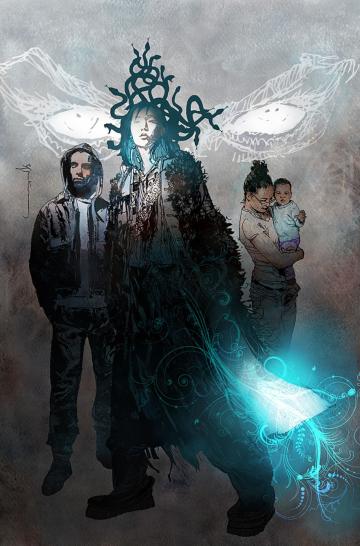