Dark Horse Comics may not be releasing any digital comics this week, but the publisher doesn't want to leave you with nothing Dark Horse to read. To solve this problem, Dark Horse is following in the footsteps of Dynamite Entertainment and making a bunch of #1 issues free tor read digitally on their web store, Dark Horse Digital . Editorial credit: Ken Wolter / Shutterstock.com

Insisting that the announcement is "no April Fool's Joke," as if anyone has a sense of humor right now anyway, Dark Horse revealed they will make 80 #1 issues available starting today and for the rest of the month.

"From now until April 30, 2020, enjoy the work of an array of writers and artists in stories ranging from Umbrella Academy, Witchfinder, Stranger Things and American Gods, to young readers selections like Disney's Frozen and Itty Bitty Mask, to graphic novels like Hellboy Volume 1: Seed of Destruction, Beasts of Burden Volume 1, and Empowered Volume 1!" the press release shouts.

To take part in this bonanza of number one issues, all you need is a Dark Horse Digital account, and Dark Horse says you don't even have to give them your credit card number, so if you get a phone call claiming you need to hand that over to access free digital #1 issues, chances are it's one of those phone scams. All you need is an email address and you can start reading the first issue of 80 Dark Horse Comics.

Yes, technically, that's not the most useful thing in the world since comics are generally serialized and you'll need to buy the rest of the issues to get a complete story, but it's better than nothing. Dark Horse is telling readers to "stay home, stay safe, and read comics," and since they won't (as of right now at least) actually release any new comics for you to read, this is the best they can do for now.

A prophecy says that in the comic book industry's darkest days, a hero will come to lead the people through a plague of overpriced floppies, incentive variant covers, #1 issue reboots, and super-mega-crossover events.

Scourge of Rich Johnston, maker of puns, and seeker of the Snyder Cut, Jude Terror, sadly, is not the hero comics needs right now... but he's the one the industry deserves. 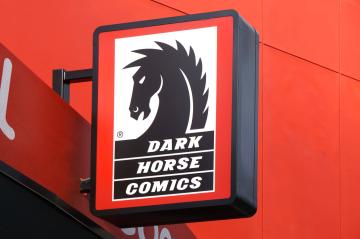