The zombie apocalypse plot is not a new concept. Since George A. Romero's Night of the Living Dead film series, there have been tons of movies, books, comics, games, and more starring shambling undead and the humans who must survive them. Rot \& Ruin is another installment in the zombie library, but the plot offers an original world and a few twists that make it unique and worth the read. Based on the New York Times bestselling series of the same name by author Jonathan Maberry, the Webtoons comic version is written and adapted by Taylor Grant and illustrated byAlempe.

The plot revolves around Benny Imura. The teen and his friends are living in a world where zombies are the norm and figuring out your place in this new world order can be daunting. At age 15, every living human is forced to secure a job. If you don't, your rations are halved, making survival a lot harder when resources are limited. Jobs range from ensuring fencing is secure to sketching people as "zoms" to try to locate them among the horde. Benny's time is running out, and he is forced to apprentice his older brother Tom as a zombie hunter. Benny and Tom's relationship is strained, but Tom sees this as an opportunity to finally repair their familial bond while showing his younger brother what's really going on in the Rot and Ruin.

As you read through each episode of the new series, it becomes clear that the zombies are not the biggest issue for the world. Similar to The Walking Dead, the living are sometimes scarier than the desiccated corpses roaming the woods.

To begin reading Rot \& Ruin , head over to Webtoons and catch up on the first six episodes. New installments are set to launch every Monday.
- Advertisement- 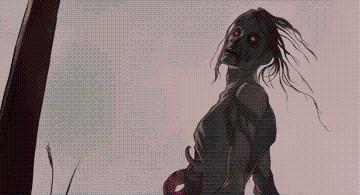